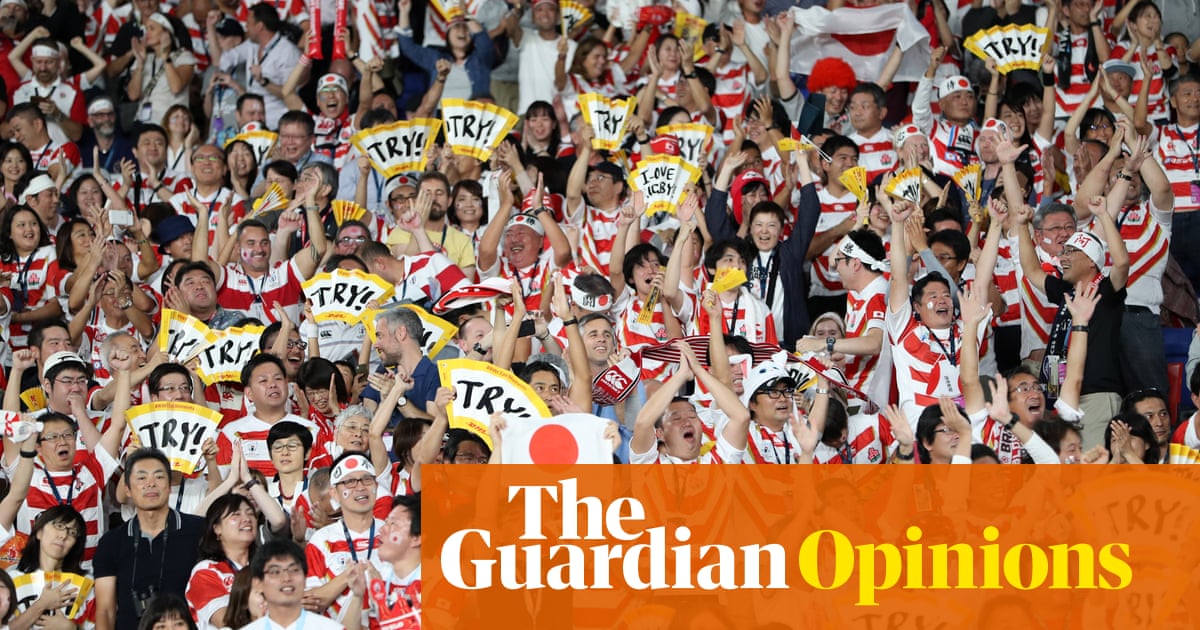 I had a conversation with some Japan supporters a few days before the Scotland match and they asked me if I thought their team might be able to cause any more upsets at the World Cup. I can safely say that is not a conversation I will be having any more because the tournament’s narrative has changed. Japan are no longer causing upsets but producing world‑class performances, and they are making a mockery of their tier-two label.

I want to start a different conversation. How about Japan joining the Six Nations? I may be inviting ridicule and there are obvious logistical hurdles that would have to be overcome but can rugby union really say it is in rude enough health that it is not a question worth asking?

To be frank, after what Japan have done I would argue rugby’s superpowers need Japan more than Japan need them. There is no doubting Japan will be in demand to join a major yearly competition and from a selfish point of view, as someone who loves northern hemisphere rugby, I hope the Six Nations give it some consideration.

To address some of the logistical issues, Japan is a long way from Europe but that said, it’s a long way from all of the nations in the Rugby Championship too. I do not want to dismiss the extra strain it could put on players and supporters but if the Six Nations needs a bit of restructuring to make it work, then so be it. In any given year, the three existing teams who play away in Japan could have a rest week immediately afterwards. Japan could then base themselves in Europe to play their away matches in a block.

From a supporters’ point of view it would mean change but that is not necessarily a bad thing. I love the historic rivalries in the Six Nations, the tribalism it brings. I appreciate introducing Japan would come with an added expense and I do not wish to make light of that but I have met lots of supporters from the home nations since the World Cup started and if I were to ask each of them whether they would want to come back on a regular basis the overwhelming answer would be “absolutely, yes”.

And that’s all before you consider the benefits that a team like Japan would bring, as well as the financial and commercial incentives. They have played some mesmerising stuff, they have broken through the glass ceiling and they have won the hearts and the minds of the nation. Now is the time to capitalise and make sure the legacy is not lost.

Part of the advertising campaign over here has been that you do not need to learn all of the laws to fall in love with rugby and that’s absolutely been the case. A friend of mine was watching the Japan v Samoa game in a pub with some locals and they had no idea what was going on in the final minute with the scrum, but when the try was scored they were crying in celebration. That’s a perfect snapshot of where rugby is in Japan at the moment but let’s take the next step.

Just under 30 million people in Japan watched that match against Samoa with an audience share of almost 50%, which is just remarkable. Compare that to England v Croatia in the football World Cup semi-final last year. That had a one-minute peak of 26.6 million. Yes, Japan has a much bigger population, so you would expect bigger numbers, but that’s a pool stage match compared to a semi-final in a football-mad country. It goes to show how much appetite there is for rugby in Japan.

And imagine if we had regular rugby of this kind of quality in Japan. There’s already this excitement but how about these viewing figures every single year for a consistent period of time.

Rugby World Cup: how the quarter-finalists shape up | Michael Aylwin

It’s a country that is desperately passionate, it wants its nation to do well. It’s a very proud nation and happy to show it off. Next year Japan will become the first country in the world that has staged a rugby World Cup, the Olympics and the football World Cup this century. There is a reason why they have all descended on Japan. We’re talking about a nation of more than 126 million people who are growing to love our sport, so why wouldn’t we do everything to make it work?

There is directive from World Rugby to get out into new territories. It is oscillating between expanding and growing fresh areas and then consolidating strongholds, which is what France 2023 is all about. Four years later there is talk of going to the US. It would be a challenge. And I’m sure World Rugby has a long-sighted vision for Japan but we are living and breathing it every single day at the moment. The supporters are loving it, the infrastructure is tailor-made for sport and that’s why all those big competitions have been hosted here.

Is rugby so buoyant that we can’t look for new opportunities? Is rugby so stable that we’re so comfortable where we live in this holy huddle and don’t need anyone else? We have to be more ambitious and perhaps be more uncomfortable in seeking new markets and openings. That’s just where we’re at.

There is a reason why we’ve had the Champions Cup final staged in Bilbao and Newcastle. There is a reason why the rugby World Cup has been taken to new territories – because we need to expand our game. It’s not often you get opportunities to grow like this and it’s important to seize them.

Content provided by The Guardian. Original piece can be found here https://www.theguardian.com/sport/blog/2019/oct/15/time-to-capitalise-jana-success-seven-nations-rugby-world-cup

Harvie against ‘unilateral’ move for independence

Lewes FC: the football club who are making equality pay