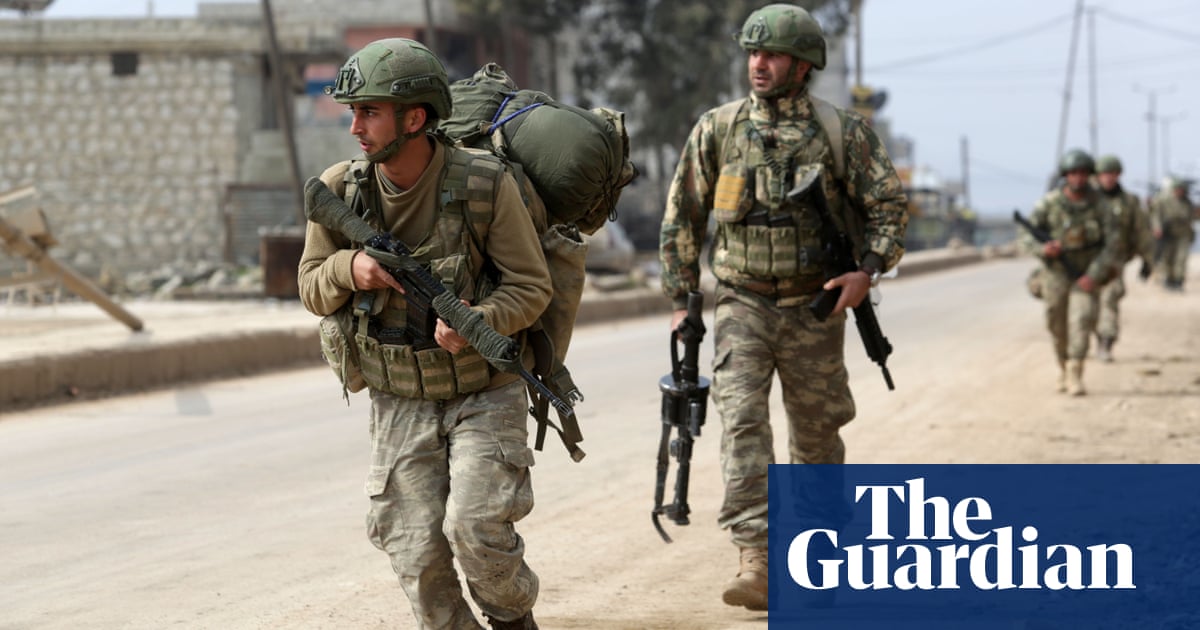 Dozens of Turkish soldiers have been killed in an airstrike in Syria’s Idlib province, in a dramatic escalation in the battle for control of the country’s last opposition stronghold.

Turkish officials said at least 33 of its military personnel were killed in the attack on Thursday night, and more than 30 others injured. Military sources among moderate and jihadist rebel factions fighting in the north-western province bordering Turkey said the deaths followed a precision strike on a two-storey building in the village of Balioun.

A Turkish convoy, part of reinforcements sent to the area to aid rebel groups earlier this month, was subjected to heavy shelling on Thursday morning. The soldiers had taken cover in Balioun, basing themselves in the local council building.

Rahmi Dogan, the local governor of the south-eastern Turkish province of Hatay on the border with Idlib, said ambulances streamed from a Syrian border crossing to a hospital in the nearby town of Reyhanli on Thursday night.

Turkish officials have blamed the Syrian regime for the attack, but several sources in Idlib and unverified footage of the nighttime strike suggested it had been carried out by the Russian air force, which has helped Damascus conduct a ferocious three-month-old offensive on Idlib.

Russia’s defence ministry denied on Friday that its planes had carried out the airstrikes but said that Turkish troops should not have been in the Idlib area and had given no warning of their presence to the Syrian government. Russia also accused rebels of trying to launch an anti-government offensive on Thursday.

After the attack the United Nations called for urgent action in north-west Syria, warning that “the risk of greater escalation grows by the hour.”

Nearly a million civilians have been displaced in Idlib near the Turkish border since December as Russia-backed Syrian government forces seized territory from Turkey-backed Syrian rebels, marking the worst humanitarian crisis of the country’s nine-year war.

Although Ankara and Moscow share important trade, energy and defence links, the relationship has already been sorely tested by the recent violence in Syria, where they back opposing sides.

Turkey responded with airstrikes on “all known” Syrian government targets, said the country’s communications director Fahrettin Altun early on Friday, according to state-run Anadolu news agency. Altun said authorities had decided to “respond in kind” to the attack.

“All known targets of the regime have come and will continue to come under fire from the air and ground,” Altun, said in a statement.

“We urge the international community to fulfil its responsibilities” to stop the regime’s “crimes against humanity”, he said. “We cannot stand by and watch as past events in Rwanda, and Bosnia and Herzegovina are repeated today in Idlib.”

Turkey’s activities on the ground in Syria would continue, he added.

The US state department has said it is very concerned about the attack: “We stand by our Nato ally Turkey and continue to call for an immediate end to this despicable offensive by the Assad regime, Russia and Iranian-backed forces,” a spokesperson said.

The Turkish president Recep Tayyip Erdoğan chaired an emergency security meeting overnight, Turkish officials briefed reporters that Ankara had decided it would no longer stop Syrian refugees from reaching Europe by land and sea – a move calibrated to win EU and Nato support for its operation in Idlib.

‘We have nothing left’: displaced Syrians wait out war in Idlib

Almost one million people are camped out in desperate conditions on Idlib’s border with Turkey in winter weather as they flee the swift advance of Bashar al-Assad’s army and allied militias backed by Russian airpower.

Turkey has expressed unwillingness to take in any more Syrians on top of the 3.6m refugees it already hosts. In an effort to secure its southern border, Ankara took the unprecedented step of sending thousands of troops and convoys of equipment to Idlib in the past three weeks, leading to direct clashes with regime forces for the first time.

While Idlib province and the surrounding countryside are technically protected by a de-escalation deal brokered in 2018, the agreement broke down last year after control of most of the area was wrested from more moderate rebel groups by Hayat Tahrir al-Sham (HTS), formerly al-Qaida’s Syrian affiliate.

Despite warnings from the UN and aid agencies that fighting in Idlib would put 3 million civilians at risk, Damascus launched an attritional and then full-scale campaign on the province, arguing that HTS was not covered by the de-escalation deal.

Turkey has helped rebels to retake one town but had already lost 17 military personnel in the campaign before a strike on Thursday morning killed three, and the evening strike killed at least 22, marking the biggest single day of losses for the country’s forces.

Turkish attempts to broker a ceasefire, and growing international calls for a halt to the violence, have so far been met with indifference from the Kremlin. Erdoğan has vowed Ankara will not take the “smallest step back” in the standoff with Damascus and Moscow over Idlib, giving the regime until the end of the month to pull back.

US senator Lindsey Graham called on Thursday for the establishment of a no-fly zone over Idlib and called on Donald Trump to help stop the violence against civilians there.

“The world is sitting on its hands and watching the destruction of Idlib by Assad, Iran, and the Russians,” Graham, a Republican and an ally of Trump, said in a statement.

“I am confident if the world, led by the US, pushed back against Iran, Russia, and Assad that they would stand down, paving the way for political negotiations to end this war in Syria.”

Kay Bailey Hutchison, the US ambassador to Nato, said Thursday’s events should show Turkey “who is their reliable partner and who isn’t” and prompt it to drop its purchase of a major Russian missile defence system, which Washington says threatens the western alliance.

Content provided by The Guardian. Original piece can be found here https://www.theguardian.com/world/2020/feb/27/dozens-of-turkish-soldiers-killed-in-strike-in-idlib-in-syria-reports-say

10 years of the Houston rodeo – in pictures