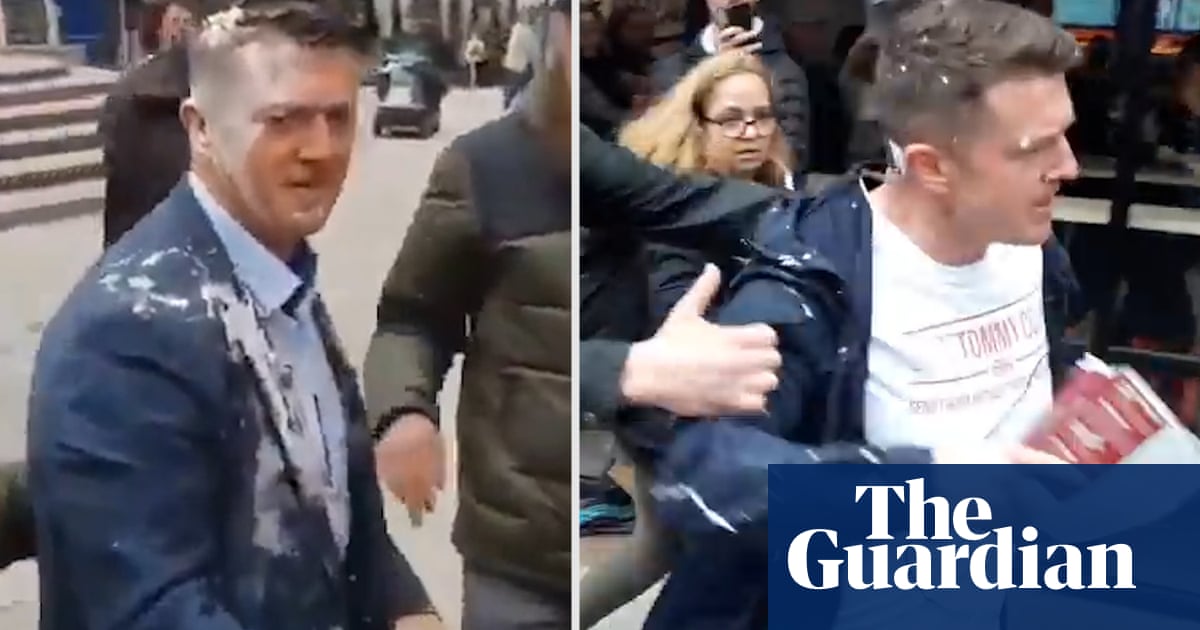 A close ally of the rightwing activist Tommy Robinson is facing a possible police investigation after fights broke out during an European election campaign event in Warrington.

Two people needed hospital treatment as trouble flared shortly after Robinson had a milkshake thrown over him in the Cheshire city on Thursday.

Members of Robinson’s security team and his supporters were filmed throwing punches and fighting anti-racism activists as the chaos erupted.

One woman, Alice Edwards, said she suffered a broken nose and needed stitches to her head after she was allegedly “punched straight on the nose” by Robinson’s campaign organiser, Danny Thomas.

Video footage shows Thomas moments earlier barging into a man standing with his hands in his pockets, in what appears to be an unprovoked incident that sparked the brawl.

A member of Robinson’s security team can then be seen grabbing John Risley, 31, from behind before he is punched to the ground.

The footage then shows Risley apparently dazed and laying flat on his back as Edwards, 24, is attacked by at least two men in the background.

Risley, from Warrington, told the Guardian on Friday he was taken to hospital and had a CT scan on his neck after being “knocked out” by one of Robinson’s supporters.

Edwards, also from Warrington, was taken to hospital suffering a broken nose, a deep cut to her head and a broken finger.

Risley and Edwards both confirmed that they had spoken to police and intend to press charges against Robinson’s supporters. They were both due to make formal statements to Cheshire police this weekend, they said.

Cheshire constabulary confirmed it is investigating “a number of assaults” and confirmed that two people had been taken to hospital before later being discharged. No arrests had yet been made, the force said.

Risley said he had been waiting for his girlfriend before being shoved forcefully when the violence erupted.

“It was just unprovoked – I was just stood there,” he said. “I had to have a CT scan on my neck from the impact of the fall. I’m 6ft 4 so it’s a bit of a way to fall. My neck’s feels like it’s got whiplash today.”

Edwards said she had been trying to help Risley when she was allegedly chased and punched by Robinson’s supporters.

“I just felt my nose crack straight away,” Edwards said. “As soon as he punched me I spat a load of blood on the floor and just stood there and looked at him. He just went white and ran off because the police turned up.”

The violence followed a week of chaos in Robinson’s campaign to become the independent MEP for north-west England on 23 May.

The English Defence League founder, whose real name is Stephen Yaxley-Lennon, was doused with milkshake twice in two days on campaign walkabouts in Bury and Warrington.

He told supporters on Thursday night that he had been “politically targeted” and that Cheshire police had failed to control a group that were “intent on antisocial behaviour and disorder”. “If any other politician, or anyone else standing in politics, faced that reaction the police would have acted accordingly,” he said.

Ch Insp Simon Meegan, of Cheshire police, urged witnesses to the violence to come forward: “We are aware there has been a lot of talk, videos and speculation about what happened on social media but we need to hear from people who were there at the time and witnessed what happened.

“In particular, we want to hear from anyone who was in the area at the time and recorded any of the incidents on their mobile phone.”

Meegan added: “This is a complex investigation, which involves a large number of people and we are treating this matter seriously and asking for the public’s help in tracing those responsible.

“We will not tolerate disorder or any level of violence in Warrington, whatever the motivation, and I would like to thank members of the public who have already provided information to assist the police investigation.”

Content provided by The Guardian. Original piece can be found here https://www.theguardian.com/uk-news/2019/may/03/woman-claims-tommy-robinson-ally-broke-her-nose-at-cheshire-event