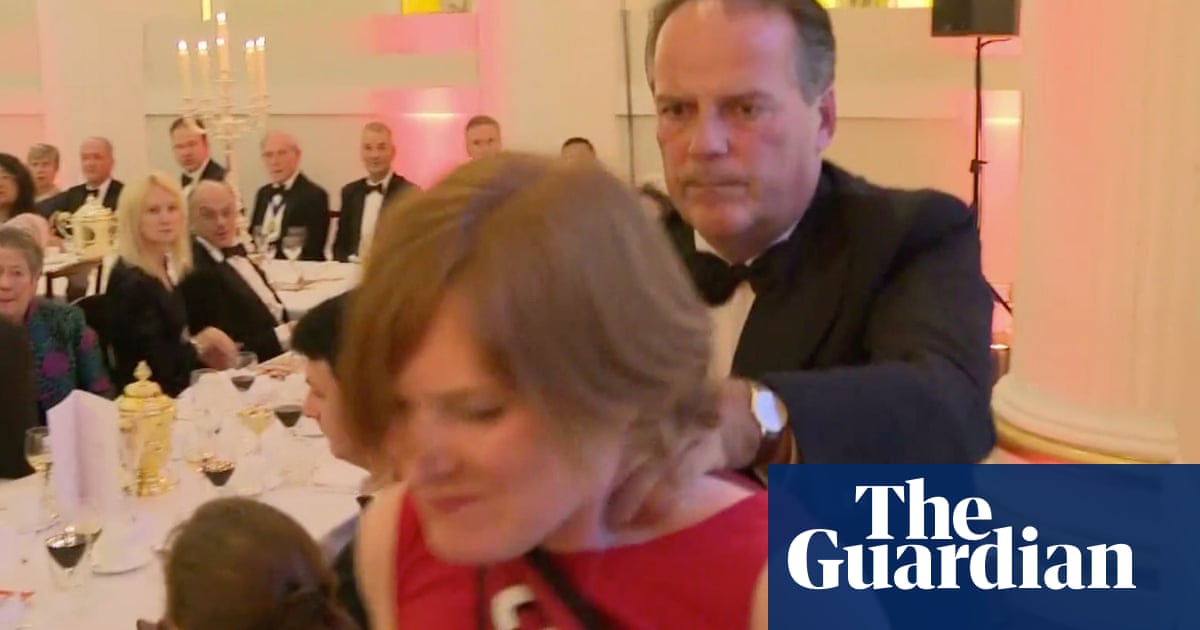 The Conservatives have been plunged into controversy after a video showed a minister grab and manhandle a protester who disrupted the chancellor’s Mansion House speech.

Police began looking into the incident on Thursday night after footage showed Mark Field pushing the female Greenpeace activist against a pillar and grabbing her neck. There were calls for Field to lose his position as a Foreign Office minister. In a statement, he apologised to the woman and said he would refer himself to the Cabinet Office over the incident.

Meanwhile a separate scandal threatened the party as Antoinette Sandbach said she was sent messages by an unnamed fellow Conservative MP demanding she leave the party. Senior Tories condemned the messages and pledged to investigate.

The video footage appeared to show an incident that occurred as dozens of Greenpeace activists sought to draw attention to the climate crisis while Philip Hammond prepared to deliver his set-piece address in the City of London.

A group, most dressed all in red and wearing sashes bearing the words “climate emergency”, attempted to read out a message and “drown out” Hammond.

In a short clip, later posted online by ITV News, Field grabbed one of the female activists, shoving her against a pillar and then marched her away while gripping the back of her neck. Greenpeace UK said: “We were shocked at the footage of an elected MP and government minister assaulting one of our peaceful protesters at the Mansion House tonight.”

City of London police said: “We have received a small number of third party reports of an assault taking place at the [Mansion House] event. These reports are being looked into by police.” No arrests had been made, officers said.

The Conservative party chairman, Brandon Lewis, said the incident had been referred for an internal investigation, telling ITV’s Good Morning Britain on Friday: “It’s very hard not to be astonished by what you’ve seen.”

Labour MP Dawn Butler said the incident shown in the footage was “horrific” and appeared to be an assault. She tweeted: “[Field] must be immediately suspended or sacked.

“I’m sure I’m not the only one who is wondering why no one intervened. So much violence does not seem justified. An investigation needs to take place as soon as possible.”

In a statement Field said he reacted “instinctively” and had been “genuinely worried” that the protester might be armed. He said he “grasped the intruder firmly in order to remove her from the room as swiftly as possible”, adding: “I deeply regret this episode and unreservedly apologise to the lady concerned for grabbing her but in the current climate I felt I needed to act decisively to close down the threat to the safety of those present.”

Field said he had referred himself to the Cabinet Office to “examine if there has been a breach of the ministerial code and will of course cooperate fully with their investigation”.

The Liberal Democrat former cabinet minister Sir Ed Davey called on Field to resign from the government. “No ifs, no buts about this. The sight of some penguin-suited Tory minister behaving in a violent way towards a female Greenpeace activist absolutely stinks.”

Field’s fellow Foreign Office minister, Alistair Burt, was shown the clip by the BBC’s Newsnight programme and, afterwards, said: “Mark will answer for himself but it looks to be a very difficult situation for everyone concerned.”

The Tory MP Sir Peter Bottomley defended Field, saying the activist “was trying to create a fuss. Most viewers would say it’s good that she didn’t succeed.”

Last month, Field delivered a speech at a Westminster Hall debate in which he decried violence against and intimidation of female activists across the world.

The Foreign Office and Downing Street were contacted for comment.

According to the video, the rest of the activists were forced out of the room. After they had been removed, Hammond claimed it was “ironic” they had chosen to stage the protest shortly after the government had announced its commitment to reach net zero carbon emissions by 2050. Afterwards, Greenpeace UK countered that the Treasury had “tried to water down” the government’s action on climate change.

Also on Thursday night, Sandbach posted an image on social media of messages she said were from a colleague and suggested that similar abuse had been behind the decisions of three female former Tory MPs to leave the party.

“Barely is the ink dry on the results and the dark ops begin,” Sandbach, who supported Rory Stewart in the leadership race, wrote on Twitter. “This from a male conservative MP to me as I sit on the train home.”

The messages, which came only hours after Tory MPs voted Boris Johnson and the foreign secretary, Jeremy Hunt, through to the final round of the party leadership contest, read: “You too are a disgrace. Time you left the party I think.” She tagged it with the words “completewankspangle” and later deleted the tweet.

In a supplementary tweet that remained live, the MP for Eddisbury added: “It’s bad enough when you get it from complete strangers. Is it any wonder three female MPs left.”

Hunt denounced the messages, and added: “We have to come together as a party.” Julian Smith, the government chief whip, promised to investigate and offered to meet Sandbach on Monday.

Smith said the messages were “totally unacceptable”, and thanked Sandbach for supporting the government in parliamentary votes on Theresa May’s Brexit withdrawal agreement. Sandbach told the Guardian on Thursday night that she and the party were dealing with the incident internally.

Content provided by The Guardian. Original piece can be found here https://www.theguardian.com/environment/2019/jun/20/greenpeace-activists-target-philip-hammond-speech-in-climate-protest

Andy Murray column: I asked Ashleigh Barty to partner me at Wimbledon

Liberal Democrat conference: Five things to look out for